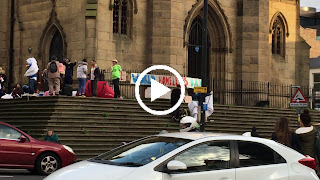 This video was taken in one of the inner cities in U.K. but the scene is quite a common spectacle in many cities across U.S.A. and U.K.  In U.K. alone there are 850.000 properties empty - yes can you believe that?  No one lives in them some in areas quite attractive some of those houses owned by the government-the council of that area.

I myself have worked in housing throughout the U.K. as well as being a property developer too!  The one good feature about the hot property train in the U.K. is that private developers have been prepared to renovate properties that were just being wasted and uninhabitable.  That is, private funding has breathed the Dragon Energy into these places making them more attractive for people to want to own or rent them.

However, streets and streets of houses were left empty for years a particular example of this was the Welsh Streets in south Liverpool where Ringo Starr of the Beatles grew up.  I actually visited a client there once who was the last resident on the street and the one thing that stood out was she continued to have her hanging basket of flowers outside her home.

Yes, even when all around you is delapidated and fading if you can reach in to your own energy well and bring this out then it shifts everything else you see.  But what happens when you have nowhere to live?  There is no availability?  There are thousands of families alone in London living out of hotels and bed and breakfast dwellings.

Only 8 of the families affected by the Grenfell Disaster have been rehoused everyone else is in temporary accommodation.  How can you Feng Shui your environment when you have nowhere else to go, live or be part of?


When thousands of people have been deemed homeless because suddenly huge superpowers want to bomb your residence for no other reason because they can then where do you go and what do you do?  One day you are a nurse working in a hospital the next day you are climbing a mountain with nothing but the clothes on your back!

What happens as a result if this affects peoples' self worth, their mental health, their whole value in life.  What other people take for granted these people are wondering which is the best place to stay safe, warm and sane.

The solution to homelessness is quite simple really for the U.K. - one of the richest countries in the world cannot provide houses for people to buy or rent?  Here is my list of points why there is insufficient housing and some of it has a lot to do with the Feng Shui of the Country itself:


If you resonate with some of the above sentiments feel free to comment or contribute alternatives to the above opinion.  Know that nature, colour, vibration, energy and frequency all contribute to how you shape your view of the world and if you want to change yours look no further than: www.wealthyspaces.com
Posted by cathihargaden at 19:46:00